Writing Memoir Is an Act of Self-Compassion 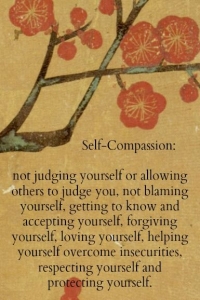 One of the hallmarks of writing memoir is making sense of your life experiences. The very act of looking back and seeing how seemingly disparate events are connected by deeper themes leads not only to insight and wisdom but also to self-compassion. Writing about the past provides an opportunity to see who you once were through new eyes, and to realize that you could not be who you are now—the woman sitting at her desk writing her memoir—had you not been who you were then, a younger self in the throes of experience that has shaped you into who you have become.

In 1996, when I was twenty-nine years old and the mother of an almost two year old, I was the graduate speaker at Simmons College commencement, where I was graduating with a master’s degree in children’s literature.

Fifteen years later, when I was writing my MFA thesis, which would become the seed for my memoir Searching for Salt: A Writer’s Quest to Recover Her Voice from Generations of Silence, that scene—me standing behind the podium delivering that speech—made its way onto the page and brought with it the title Searching for Salt.

At the time that I was writing my thesis, I worried that this scene, which had come out of nowhere, as significant scenes so often do, had nothing to do with the story I was telling.

Little did I know then that the story I thought I was telling would slough away as I excavated the deeper story that this scene pulled to light: my voice story, which was in its infancy at the time the scene takes place but was, by the time I was writing creative nonfiction, the deeper story that wanted to be told. It is one of the few scenes that remains from the initial draft.

This past weekend, while working on my memoir, I came to the speech scene. As I considered how to revise it to drive forward the deeper story—from silence to voice—I pulled out that old speech wondering if any of it would show who I once was in relationship to my quest to recover my voice.

I was surprised at what I found. As I reread the speech, I was struck by how I was already addressing silencing as a societal issue even then, though I was years from realizing that it was, in fact, my personal subject—a subject that holds my voice, my deeper truth, my story.

The part of me that is now a more seasoned writer smiles at the imperfection of the writing, most noticeably the mixing of metaphors. There was a time, somewhere between then and now, that I would not have been able to see beyond this imperfection to the deeper truth that the writing yields: a young woman in the early stages of realizing her vision and putting this vision into words even though she would have to wade through an almost insurmountable fear of speaking in order to deliver it.

The speech itself does not convey the fact that my knees shook so violently behind that podium that I teetered on my heels. It gives no indication that the shaking welled up from a place so deep within me that it snaked its way right into my voice, which shook and cracked and squeaked as I spoke. Nor does it convey the wave of shame I felt that all those people out there could hear my terror, which I could not yet see a context for: I saw it then as a personal failing, something I should hide.

Looking back, I now see the shaking that rattled my body and voice that day not as a failure but as a turning point moment in my quest to recover my voice. Now I get it: the shaking made visible and audible what I was up against internally to stand and speak before that audience. In that moment, silence, accompanied by shame, rose to silence me, and I—shaking—rose higher.

Now, when I gaze upon this scene in the context of my memoir, I see a young woman brave enough to open her mouth and speak.

And that’s the thing about writing memoir: Were I not a memoirist, were I not writing this story, were I not looking back and trying to make sense of a deeper silencing in my own life, I would not have realized this depth of compassion for who I once was: a young woman who spoke despite her fear of speaking and continued speaking even though her voice shook, a young woman on whose shoulders I’ve built my life and become who I am now looking back.

I look back and I am proud of her, that young woman I was, which is no small thing given how far she was from being proud of herself.

Were I not a memoirist, I may have gone my entire life believing what she once thought: that the cracking of her voice was a sign of failure, proof of her unworthiness, evidence that she had nothing important to say as she stood behind that podium shaking in her shoes.

Were I not a memoirist, the echo of that shaking might be all that remained of the words I spoke that day, proof of shame rather than of courage born of taking imperfect action.

But because I am a memoirist, looking back and gathering my previous selves into a story, I can feel her in my heart, here, now, as I view her with compassion for the strength she never knew she had.

And because I am finally proud of her—a pride born of compassion that comes from writing to the truth—I share her words with you, words that, much like a photo, give you a glimpse of who I once was on my way to becoming who I am now, looking back, beaming.

Here’s that speech, titled “Pass the Salt,” in full:

I would like to start by telling you a story from Frances Temple’s young adult novel Taste of Salt. It is a Haitian folktale, and it goes like this. If a person dies, and their body is stolen by a zombie master, the zombie master will make the body rise and work all day and all night as a slave. The zombie understands only her suffering. She has no power to break away. She can only work and work. But there is one little trick that can save her. If the zombie can get a taste of salt, she will understand. She will then open her true eyes and see that she has been made a zombie. She will turn against her master. She will obey him no longer. She will make herself free.

I share this story as a way of raising the possibility that there may be a zombie master lurking in our own society. I am sure that each of you, in the past two, four, six—or however many years you have spent working on your degree here at Simmons—I’m sure that each of you has at some time or other felt like you were a zombie. Just think back to final exams or that last all night paper you wrote with bleary eyes. Let’s face it, being stellar Simmons students, we reach the point where our brains are fried.

But that is not exactly what I am talking about. What I’m talking about is not so much frying your brain as having the wool pulled over your eyes. For that is how the zombie master operates: it has us doing its work without us ever really knowing that that is what’s happened. Something like abracadabra. But what work is this? And who, or what, exactly is this master?

Well, the zombie master in our own society is basically a system. It is a system of exclusion that opens doors to some people but then systematically closes those same doors to other people. Abracadabra. And then it hangs little plastic signs from the doorknobs. You know, those handy DO NOT DISTURB signs. Every time a door slams in this system, those little signs say, Do not disturb. What they really mean is, Do not disturb…the perpetuation of racism; Do not disturb…the perpetuation of sexism; do not disturb…homophobia or any other form of oppression that holds this system in place. And the thing about these doors is that their slam is not loud. In fact, if you could see a sound, this one would be almost invisible. It is that elusive. It is that silent. And it is this very silence that keeps the zombie master in business. For it is silence that allows the zombie master to perpetuate this exclusive system.

Which is exactly where we come in. Now that we have earned degrees from Simmons College—no matter how we may be excluded by our other identities, whether we are people of color; female; lesbian, gay, or bisexual—our degree from Simmons College provides us, on some level, the privilege of inclusion. No matter what degree we take home today, doors will open for us that may not have been open before. And we will walk through them. And this is good. But because the zombie master is always lurking, there may be times that is seems as if part of our job is to close some of those very same doors behind us. Abracadabra. There goes the zombie master making us work.

But that is not our job. Let’s make our job—whether we are educators, health professionals, business personnel, scientists, parents—whatever role we represent in society, let’s make it our job to take Simmons’s commitment to diversity through every door we open, to carve new doors where none existed before. In fact, while we’re at it, why don’t we just knock those doors right off their hinges.

What’s a moment in your memoir that makes your heart, looking back, burst with love and compassion for who you once were? Feel free to leave your self-compassion story in the comments below. I would love to read it.