I am honored to be this week’s guest writer-in–virtual-residence at Maia Toll’s seasonal Witch Camp, which explores the creativity and fertility of Spring through writing and ritual.

Maia, an herbalist, life coach, and owner of herbiary, combines traditional wisdom with modern medicine. She teaches that an altar is a sacred space that honors creativity, and believes that an altar can be a portal to your deepest truth, “a designated spot for reflection.”

One of the benefits to creating an altar, Maia says, is to begin to see the stuff that surrounds us as sacred: “When we have designated something as ‘sacred’ we see theenergy that it holds. We understand that the photos hold a bit of the wisdom of the person photographed, that a stone remembers the earth, and a feather the bird.” 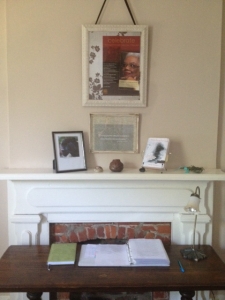 In Maia’s words, the purpose of clearing and smudging the space that you designate for your altar “is to create a blank canvas to which you can now purposefully add things. The clearing off is also part of the consecration, if you will, the energetic act of turning something mundane, like a tabletop, into something sacred.”

You can learn more from Maia about the why and how of smudging here.

After I smudged my writing altar, my writing table, and the surrounding space with smoldering sage, I set about selecting objects to put on my altar.

What happened next seems, in hindsight, to have sprung from a source beyond my conscious awareness. It was as if I was “guided” to create my altar, adding to it items that together speak a sacred truth about my memoir in progress Searching for Salt: A Writer’s Quest to Recover Her Voice from Generations of Silence.

You can see the objects I chose in the photo of my writing altar above, but I will describe them here to give you an understanding of my process of declaring my space sacred.

The photo of the panther represents an aspect of my memoir that connects the present-time narrative—recovering my voice—with the young girl I was when I stopped speaking my truth.

The book opposite the panther is the “mock memoir” jacket that I created to help me envision my memoir as completed. The cover includes the image of a young girl with a panther emerging from her upper back—a simple pencil drawing I found on the Internet, a find that helped me to realize my story was larger than me; indeed, that it touches what Jung calls the collective unconscious or what some spiritual traditions refer to as animal guides.

At the base of my mock memoir is a river rock with the word completion engraved on it. Completion is my writing word of the year.

A clay fertility Goddess and a conch shell sit between the photo of the panther and the mock memoir. I acquired the clay Goddess when I was twenty-six years old (I am now forty-eight) and just setting out on my quest to recover my voice, which has proved to be a journey of becoming the writer I am, of healing, of a return to my own knowing.

My father gave me the conch shell when I was six or seven years old. And though this was the time in my life when I was learning to silence myself, I held that shell to my ear for hours, mesmerized by the sound of the ocean. It holds for me a larger truth: despite life’s wounds, I remained connected to something larger than me—the beguiling sound of surf despite the fact that I was miles from the ocean.

I adorned my altar with two more “objects”: a poster of Lucille Clifton’s poem “won’t you celebrate with me,” which ends with the lines “…come celebrate / with me that everyday / something has tried to kill me / and has failed.” (In my mind, I often replace the word silence for kill.) And a small print of my favorite Adrienne Rich quote: “Every poem breaks a silence that had to be overcome.”

I hung the Lucille Clifton poster with a length of brown velvet ribbon. Two years ago, when I was healing from breast cancer, which is also part of the present-time narrative of my memoir, my dear writing friend Bunny knitted me a pair of socks. She wrapped them in tissue paper and tied the bundle with this length of velvet ribbon. Years before that, when I was still attempting to write my truth as fiction, Bunny told me that it was as a writer of creative nonfiction that I shined. This ribbon, too, speaks a truth about who I am as a writer.

All of the objects on my altar had been in my writing space “willy-nilly” before I created an altar. It wasn’t until I declared them sacred that I began to see the story they hold—the story of my different selves connected by a deeper truth (from silence to voice) that speaks into being who I am as a result of who I have been.

Maia says, “Smudging gives you a clean slate, a way to start again.”

Was it the smudging, then, that brought such a heightened sense of awareness to my altar? That worked a kind of magic on my ability to see anew my own writing truth?

I can only say that when I stood back from the altar I’d created after deeming the objects on it sacred I was flooded with a knowing that I was nearing completion and that this knowing, which I’d once, so long ago, dismissed, would yield its own kind of magic.

Do you consider your writing space sacred? I would love to hear your thoughts in the comments below.