Culture does not make people. People make culture. If it is true that the full humanity of women is not our culture, then we can and must make it our culture. 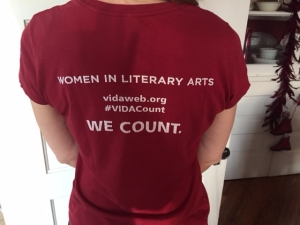 VIDA: Women in the Literary Arts is an organization that works for gender parity and justice for women writers. In its efforts to transform literary culture by “lifting women’s voices,” VIDA is best known for The VIDA Count, an annual count that measures the ratio of male to female authors represented in prominent literary magazines.

We’re talking numbers counted magazine by magazine, byline by byline. When I first saw the Count 2010, the numbers were so staggering, so surreal, that I experienced a moment of displacement as I wondered which century I was standing in. Just to give you a taste, here’s a clip of that early count from the VIDA website:

The VIDA Count reveals major imbalances at premiere publications both in the US and abroad. For example: The New York Review of Books covered 306 titles by men in 2010 and only 59 by women; The New York Times Book Review covered 524 books by men compared to 283 books written by women (VIDA Count 2010).

From its inception, the VIDA Count has been pushing the conversation about women in the literary arts by illuminating the reality of whose voices are given space in prominent publications; or, rather, whose voices—and stories and perspectives and human knowledge and experience—continue to go unheard.

In recent years, VIDA has extended its reach. The year 2014 brought the first Women of Color VIDA Count, and this year’s Count 2015, which VIDA dubs “the year of intersectional thinking,” examines race and ethnicity, gender, sexual identity, and ability. Not surprisingly, women with these identities are less represented than women in general.

With the recent publication of the VIDA Count 2015, VIDA continues to ask questions that underscore the importance of all women’s voices to the well-being of a culture at large:

If certain women’s voices are absent or poorly represented in mainstream publications, how does that deficit shape public thought? What are implications on the public imagination, if any? Do stereotypes take the place of lived women’s thoughts, ideas and experiences? To what extent is the status quo rendered bankrupt by such glaring absences?

If the literary landscape is dominated by specific groups, how can we be healthy as a society and benefit from both our differences and commonalities? Isn’t one of literature’s effects to humanize populations beyond our own?

By raising awareness of the extent of the silencing in literary culture, the Count is effecting tangible change. Some publications that take the Count to heart have raised the number of women represented in their pages.

The New Republic, for example, went from 21 percent bylines by women in 2010 to 45 percent in 2015. They also had the highest number of women of color represented by any of the magazines included in the count.

But the VIDA Count also has enough years under its belt to prove that a deliberate effort to include more women’s voices is not a “one and done” deal. The Paris Review, for example, increased their bylines by women authors from 20 percent in 2012 to 51 percent in 2013 only to slide back to 40 percent in 2014 and slide yet again to 34 percent in 2015.

How is such a backslide possible for a publication that had initially begun to turn the tide? Because deeply ingrained cultural patterns are just that: deeply ingrained.

It takes ongoing, deliberate intention to go against the grain of silence.

Without an ongoing deliberate intention against silencing, no matter how well-intentioned the publication, the ingrained cultural pattern will seep back in (think of it as a default pattern) and silencing will resume.

I liken to this “backlash” of silencing to a trick birthday candle: just when you stop blowing because you think the candle is out—poof—it flares back to life.

The same goes for internalized silencing.

Here’s something to think about. The cultural silencing illuminated by the VIDA Count is an external representation of the internalized silencing you bump up against as a woman writer.

That’s right: The VIDA Count mirrors your own personal experience as a female writer.

Part of your job as a writer, then, is to distinguish the internalized conditioning that threatens to silence you from the truth of who you are as a woman with a story worthy of literature.

So I encourage you to visit VIDA and familiarize yourself with The Count in general and to read The Count 2015. Notice the trends that have unfolded since The VIDA 2010 Count. And keep this in mind: The degree to which you as a female are underrepresented in the literary world likely mirrors the degree to which internalized silencing challenges you as a writer.

This is not meant to discourage you in the face of some admittedly discouraging numbers!

Yes, The VIDA Count is a measure of a stark reality. As Roxanne Gay, author of Bad Feminist, puts it, “The gender (and racial) inequity exists. It is stark. Counting is useful for reminding us.”

The VIDA Count is indeed a reminder that offers an annual opportunity to renew your commitment to your writing in the face of silencing.

As part of your renewed commitment, I want you to consider that anything—and this includes your internal critic and all its pesky doubts—that gets in your way of fully claiming your writing is some degree of silencing at work.

Here’s a reframe for you:

Rather than viewing the disparaging numbers revealed by the VIDA Count as proof that the culture persists in silencing your writing, consider the power of your writing—your voice—to shape and evolve the culture.

In her TedX Talk titled “We Should All Be Feminists,” Chimamanda Ngozi Adichie proclaims: “People make culture. If it is true that the full humanity of women is not our culture, then we can and must make it our culture.”

Every woman’s voice is necessary to the full humanity of our culture. That includes your voice. And your voice, coupled with a deliberate and ongoing commitment to your writing, is the breath that extinguishes silencing.