Conscious Writing Journeys ~ Joanne Cooper: “Journals were a lifeline for me.”

Welcome back to the Conscious Writing Journeys interview series. In today’s interview I speak with Joanne Cooper, a woman whose life experiences led her to writing as part of her larger purpose.

Joanne Cooper is so in tune with her intuition that serendipity, which she refers to as “Grace Winks,” is central to her way of being in the world; indeed, in our conversation she tells a story about how serendipity led her to make a commitment to her writing that ultimately led her to Writing Women’s Lives Academy.

Prior to our interview, I would have told you that Joanne came to writing at midlife. It turns out, however, that she—like so many women—spent much of her childhood, adolescence, and teen years writing in a journal. “Journals were a lifeline for me,” she says, and her choice of the word lifeline—her voice as lifeline to her Self through writing—is not lost on me. How many of us kept our interior selves alive in those formative years through writing?

And though she received encouragement from a high school English teacher who told her she was a good writer, Joanne thinks this encouragement scared her. In hindsight, she suspects that she didn’t have a formed sense of self then—nor by extension the confidence—that writing demands. So she became a nurse, a profession that allowed her to begin her career as a healer.

But a life-changing event returned Joanne to her old habit of writing feverishly in journals. After giving birth to triplets prematurely—and subsequently losing her son Ben at birth and her daughter Katy less than a year later—Joanne found herself writing to her children in journals as a way to make sense of the enormous love and loss that she was feeling. “The moment I became a writer,” she says, “I became a writer by writing to them.”

Once again journals became her lifeline as she rejoiced in mothering her daughter Sophia while simultaneously grieving the loss of Ben and Katy.

As for silencing? Joanne acknowledges that silencing herself was once a “method of survival,” but that writing has been an act of empowerment that led to her voice, which led her to make changes in her life she may not have made otherwise. Ending a marriage, for example. She acknowledges that she’d been raised as a female to find a knight in shining armor to rescue her; she discovered through her writing that “the knight was me.”

“Now writing is my survival,” she says, which brings us full circle to that lifeline her adolescent self found through writing in journals.

Joanne’s reading at the end of our conversation is another “Full Circle.” Listen in as she reads a memoir essay that brings her full circle from being the mother raising one child while grieving the loss of two children to using acupuncture to assist another woman to become pregnant, an experience that leads Joanne to fully claim herself as a both a writer and a healer for whom women’s health is her passion and her purpose. 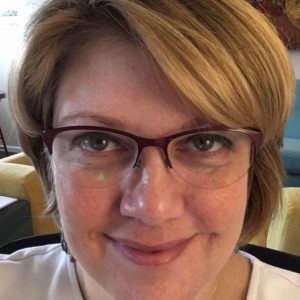 Joanne Cooper is an emerging essayist and memoirist who explores topics of faith, mystery, healing, and transformation in her writing. After giving birth to triplets prematurely, and subsequently losing her son Ben at birth and her daughter Katy a year later, Joanne felt a deep calling at midlife to write her story. She describes the experience of finding her true voice on the page as a homecoming—to the truth for herself personally but also to an understanding of our collective universal truth. Of this universal truth Joanne says, “We are all comprised of Love.”

Joanne has a background as a critical care nurse and is an acupuncturist. She practices at Rosewell Acupuncture, where she specializes in women’s health. Joanne lives and writes in the northeastern part of the U.S. Visit her at www.rosewellacupuncture.com.