Conscious Writing Journeys ~ Diedre Badejo: “I am not going to let you define me.”

Ready for a healing? Diedre Badejo’s steady voice and infectious laugh pull you out of your head and into your heart as she transports you to a sense of well-being in the same way a healing returns you to truth. Not surprising, given that Diedre settles for nothing less than truth and honesty in everything she does, including her writing: “If I don’t do this I’m not being honest with myself or with anyone else. I have to tell my story. I have to tell the story of what makes me me.”

Lest you get the wrong idea, let me assure you that Diedre has a way of making honesty and truth fun. She can’t help it—it’s in her nature to bring a sense of joy to the task at hand. Indeed, when we were chatting before our interview, I asked her how her classes were going—she’s a professor and our interview landed smack-dab in the middle of her first week of fall semester—she took a deep breath and said, “Oh, we’re going to make it fun.” And then she laughed. The way she does.

Diedre is no stranger to publications—academic books and articles as well as short stories—but back in 2010 when she heard her grown children talking about her life, she realized that they didn’t actually know her story and that, she says with her signature laugh, “other people were telling my story.”

“I needed to write my narrative,” she says, “and I needed to write the thing that always drove me.” That driving force was her fierce determination to get an education, which is the subject of her memoir-in-progress.

This determination to write her story as memoir instead of as fiction led her to my group mentoring program Excavate Your Truth/Free Your Voice, where she had the revelation that the silencing she experienced as a female of color attending Catholic schools in the middle of the twentieth century was something distinctly separate from herself. “The silencing was not me,” she says. This realization gave her new insight into why she’d always been so fierce about protecting her inquisitive nature and not accepting “the walls” she encountered as she pursued her education. It turns out that she’d been fighting all along to protect herself from the very silencing that tried so hard to skew her sense of self.

“I am not going to let you define me,” she says, words that put silencing in its proper place.

Listen in (below) as she talks about her writing journey then reads from her memoir-in-progress a scene in which her inquisitive schoolgirl self is punished for questioning the nuns’ teachings—Sister Loyola’s, to be precise. This scene is nothing short of silencing in action.

Just as Diedre’s spoken voice exudes an unshakeable sense of self, her voice on the page infuses her work with her steady presence—we trust this writer who is in command of her material and makes sense of it for us.

This excerpt, it turns out, was born of one of the exercises we did in Excavate Your Truth. How humbling to see that the conscious writing we did then is an indelible part of her memoir now.

You will come away from this conversation touched by the truth, which is, indeed, healing. 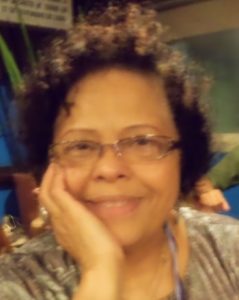 Diedre Badejo grew up in a multigenerational household of readers, artists, and storytellers between New York and Baltimore. At 19, she enrolled at Los Angeles City College, and later graduated from the University of Southern California in English and African American Literature. She also became a spoken word poet and performed in parks, cultural centers, and schools.

Her goal always was to be a writer until she found herself facing the uncertainties of a writing career at which point she completed a masters’ degree in African Area Studies and doctorate in Comparative Literature and History at UCLA. After completing her doctorate, she returned to the East Coast where she began a professorial and writing career.

Diedre has never been too far from creative writing as evidenced by her many journals and containers full of unpublished manuscripts, and she has never let go of the idea of writing full-time. Despite the fact that she’s always had to fit her writing into a heavy teaching load, she has produced a prolific output of work.

She is the author of Òsun Sèègèsí: The Elegant Deity of Wealth, Power, and Femininity (Africa World Press) and Indigo and Brass: Culture, Creativity, and Agency of Women of African Descent, a manuscript she is currently shopping. Diedre has also published many academic articles

In addition to many academic articles on African Feminism and the Goddess Osun, Diedre has also published a number of short stories and was a consultant with the PBS documentary Sacred Journeys Series segment on Osun Osogbo in 2014.