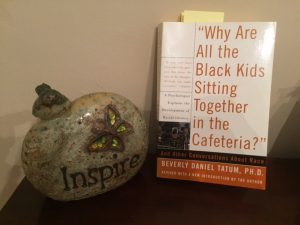 For the past several days I have wanted to post something on Facebook that speaks out against racism and bigotry. And yet, I could not find my voice. True, I had an unusually busy workweek (or so I told myself). I hit the ground running Monday morning working on client deliverables because, well, I have a business to run and I am not one to keep clients waiting. “Once I get this done and this done and this done,” I kept telling myself, “then I will post something ‘smart’ about how wrong racism is and how white privilege must end in order for us to end racism.”

Meanwhile, I pulled Beverly Tatum’s Why Are All the Black Kids Sitting Together in the Cafeteria? off the shelf. It has been years since I read this book, which was published in the late 1990s, but in my search for guidance—How in god’s name do we respond to Charlottesville?—I remembered that Tatum’s words about racism and white identity and how to actively interrupt racism had had an impact on me. Indeed, I had underlined and starred many passages, and I turned to these passages first. This one stopped my heart:

All White people, intentionally or unintentionally, do benefit from racism. A more relevant question is what are White people as individuals doing to interrupt racism? For many White people, the image of a racist is a hood-wearing Klan member or a name-calling Archie Bunker figure. These images represent what might be called active racism, blatant, intentional acts of racial bigotry and discrimination. Passive racism is more subtle and can be seen in the collusion of laughing when a racist joke is told, of letting exclusionary hiring practices go unchallenged, of accepting as appropriate the omissions of people of color from the curriculum, and of avoiding difficult race-related issues. Because racism is so ingrained in the fabric of American institutions, it is easily self-perpetuating. All that is required to maintain it is business as usual.

Business as usual. Holy fuck. In the aftermath of the most horrific outbreak of active racism this country has seen in decades—never mind the more insidious and ubiquitous passive racism—I was maintaining business as usual.

Business as usual: a form of passive racism.

Another passage I’d underlined in Cafeteria, this one in the section titled, “Breaking the Silence,” again gave me pause. It was as if Tatum were speaking directly to me, calling me out in her wise and insistent yet compassionate tone:

“What if I make a mistake?” you may be thinking. “Racism is a volatile issue, and I don’t want to say or do the wrong thing.” … If we wait for perfection, we will never break the silence. The cycle of racism will continue uninterrupted.

Ah, perfectionism, my drug of choice.

Perfectionism: a form of passive racism.

The real reason I could not find my voice in the immediate aftermath of Charlottesville? Perfectionism. I was afraid that I would say the wrong thing or sound generic or inauthentic, that I would parrot every other white person who was speaking out. By buckling to my habit of perfectionism—i.e., buckling to fear—I was making my response to Charlottesville about me instead of just saying, in whatever plain, messy, off-the-cuff way it came out: Racism stops here.

And so, without intending to—and Tatum points out that passive racism is rarely intentional—I did something much more harmful than say something clumsy or generic or imperfect. I waited. And in this waiting for perfection I posted nothing while remaining busy as usual.

Waiting: a form of passive racism.

Where to from here? I’m staking out my own “sphere of influence.” Again, Tatum:

When my students begin to recognize the pervasiveness of racism in the culture and our institutions, they begin to despair, feeling powerless to effect change. Sometimes I feel overwhelmed, too. The antidote I have found is to focus on my own sphere of influence. I can’t fix everything, but some things are within my control. While many people experience themselves as powerless, everyone has some sphere of influence in which they can work for change, even if it is just in their own personal network of family and friends. Ask yourself, “Whose lives do I affect and how? What power and authority do I wield in the world? What meetings do I attend? Who do I talk to in the course of a day?” Identify your strengths and use them.

One of my strengths? I have a voice.

Heather Heyer’s mother said, “You took my child from me, and I am going to be the voice she can no longer be.”

I intend to interrupt “business as usual” using mine.

If you are reading this, you are in my sphere of influence. I am saying to you, in my own imperfect way, No more waiting. Fuck perfectionism. Racism stops here.