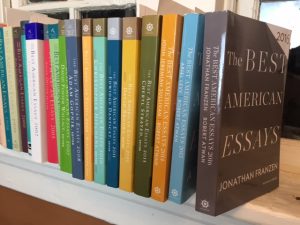 As this year draws to a close, I want to share with you a Best American Essays submission tip that I first learned from my mentor Sonya Huber.

In addition to featured essays, each Best American Essays volume includes an extensive list of Notable Essays. We’re talking hundreds of essays that did not make the final cut. This list appears at the back of each volume. The Notable Essays list exposes authors to many new readers as well as to editors who may solicit from the Notable Essays list.

But if your work was published in an online journal, consider it your responsibility to get your work to The Best American Essays editors.

Here’s what series editor Robert Atwan writes regarding online publications in his forward to The Best American Essays 2016:

“Editors of online magazines and literary bloggers should not assume that appropriate work will be seen; they are invited to submit printed copies of the essays to the address above. Please note that, owing to the increasing number of submission from online sources, materials that does not include a full citation (name of publication, date of publication, and author contact information) will no longer be considered.”

Because editors of literary journals are often stretched for time and resources such as printer ink and paper, you the writer should not assume that your online publication was printed and submitted to Best American Essays. In fact, assume it was not submitted, and plan to do this task yourself.

You can see complete guidelines for Submissions for the 2017 volume here. Note that Best American Essays is the second entry on this list of guidelines. (Submission guidelines also are included in the forward of each volume. Always use the guidelines from the most recent volume.)

A couple of pointers to keep in mind as you prepare your published essay(s) for submission to Best American Essays:

•    Print your essay directly from the online journal it was printed in so that the BAE editors receive a print copy of the essay as it appeared in the journal. Editors will not consider essays sent in pre-publication manuscript form. (In other words, don’t send them your personal word or pdf file. They need to see your publication in published format.)

•    If possible, include the table of contents or the masthead of the issue your essay appears in.

•    Include a cover letter with your submission. While this may not be required, it is professional and gives you an opportunity to make a connection with the editor. It also provides a space for you to include a full citation (name of publication, date of publication, and author contact information). As noted in the guidelines, submissions that do not include a full citation will not be considered. Keep your cover letter short but friendly.

•    Here is a sample cover letter I submitted with one of my essays for the 2017 volume:  bestamericanessays2017_coverletter_marilynbousquin. Feel free to use it as a model for your own cover letter. (Note that the Houghton Mifflin address may have changed since I wrote my cover letter. The correct address appears on the Submissions for the 2017 volume guidelines here.) In addition to a cover letter, I included a separate “full citation” page with my contact information, name of publication, and date of publication so that the editors could find my information “at a glance.”

Questions? Let me know in the comments, and I’ll get back to you.

Meanwhile, print out those online publications and submit your work to The Best American Essays 2017 before 2016 comes to an end!